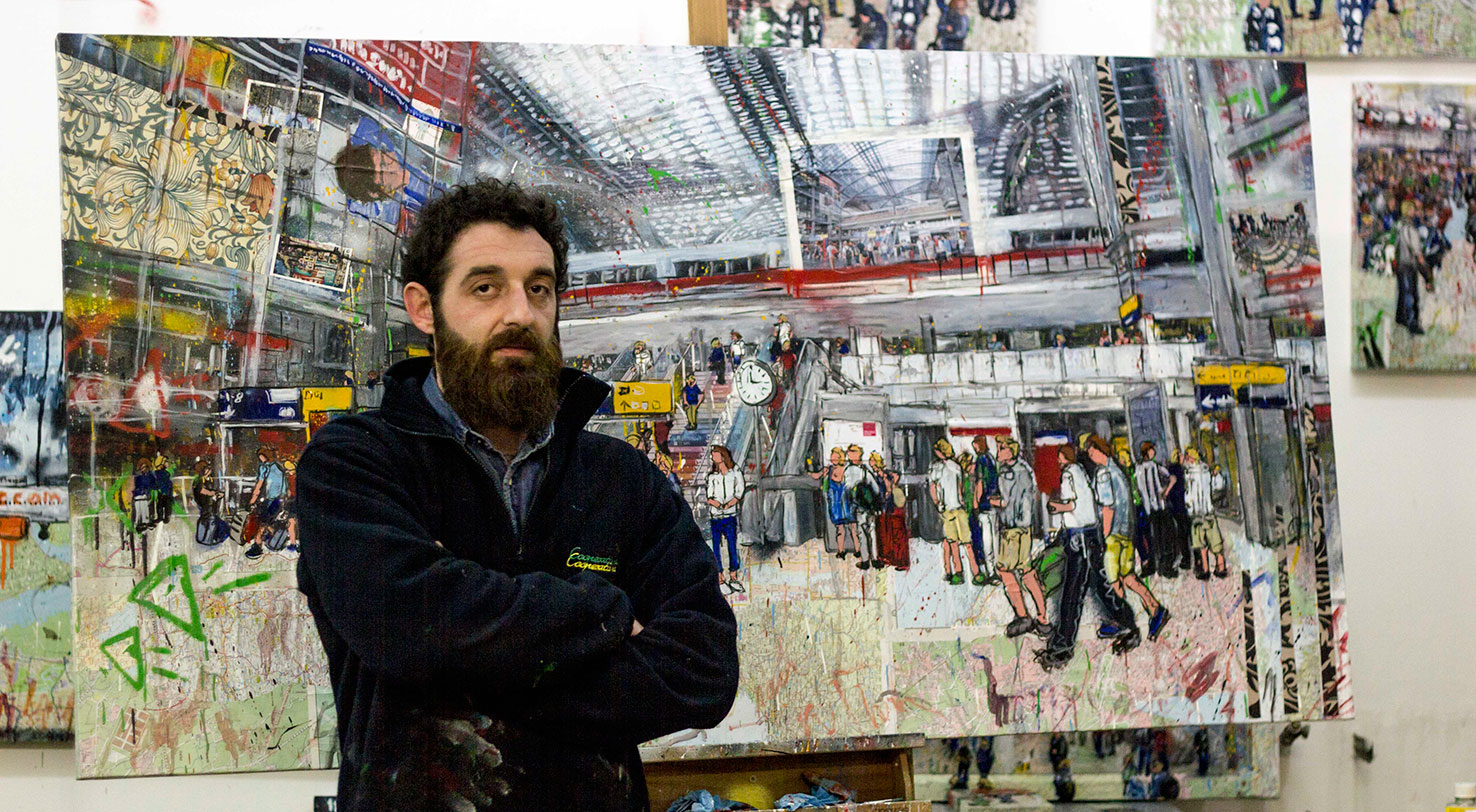 Andrea Sbra Perego was born in Bergamo in 1982, it’s formation passes from Art School of Bergamo to the Academy of Fine Arts in Brera, Milan and his pictorial style is made up of masters such as Fabio Maria Linari and Gianfranco Bonetti, to whom the artist has always been very close.

Since 2000 he has exhibited his works in numerous solo and group exhibitions in various Italian cities like Milan, La Spezia, Rome and Genoa.

Fundamental step in his research is 2006, when he wrote the "Fantastic Treaty on Oroccoccoro Manifesto", a book that gives birth in 2013 to the Oroccoccoro Global Art Movement, a movement made up of mostly Italian artists who live and work in different country of the world (Italy, United Kingdom, Malaysia, USA).

It is during these years of constant movement that his artistic production focuses to analyze the close relationship between man and urban environment and to "tell the present, because tell the present is or should be responsible for any artist"; so his works often involve the human figure, or portrayed as protagonist or seen in it’s natural interaction with the urban territory.

Perego think that the artwork   is not just the product of studio work, on the easel, but it is living itself to the rhythms of society and being an active part of it, the adventure of existence through the research of art, if possible .

He currently resides and works in Turin.

His works have been exhibited in various galleries in Italy and around the world; among the most important cities to mention are: Milan, Turin, Venice, London, Berlin, Osaka, Miami; a large dimension canvas of the artist is permanently displayed at the International Airport of Miami.

It is an architecture filled with humanity to emerge from Andrea Sbra Perego’s painting, where the recurring theme is the city that lives and pulsates with the inevitable human factor.

Squares, urban glimpses or railway stations are from time to time animated by a crowd with undefined contours, in constant motion.

Nervous brushstrokes, like vectorial forces different by intensity toward and direction , mixed in dropping and graphics, vibrate in unison at the sky, a mobile blue and full of accents, with never quiet fronts of the buildings, in perfect harmony with the unstoppable human swarm.

The Immediate and rapid gesture of painting, and the incisive and synthetic stretch, correspond to continuous motion of which is saturated each canvas, artist's autobiography in pictures, a tireless globetrotter and stateless person by vocation.

Spaces of accelerated and frenetic journey, or the usual tourist destinations, such as urban monuments and historic centers, or infrastructure for high flux transport is the object on which it focuses its investigation.

It is these the non-places par excellence, where the city is seen in relation to man, but like constant presence in the form of urban swarm, in which between indistinct mass is the individual's identity to be lacking.

Metaphors of transience, of the situation of transit and continuous flux, of his trip not yet concluded, constants in the poetics of Sbra Perego, are in fact landscape about  railway stations and airports.

If every picture seems geographically define a particular place, as well as a reference point on the time axis of memory, on closer inspection the surface of each canvas is a layering of maps, cards, tickets, newspapers and memories that often have no relevance some with the represented cities.

It is always a collage of topographic maps from various sources, with soft character pastels colors, to represent in each painting the mainland, dematerializing the asphalt and the roadway to emphasize the humanity that flows through them. The protagonists of each work thus become citizens of the world, the now inevitable emblem ongoing globalization and ultimately a kind of self-portrait of himself.

Each metropolis is thus not so much the point of arrival or the conclusion of an itinerary but the outcome of an in progess path, that everything accumulates and mixes in a continuous summation of differences, able to shape the uniqueness of every individual.

It's in this very personal inward journey, without a specific geographical destination, where each stop, each city still is a temporary situation that the viewer, homo viator occasional  or for pleasure, can recognize themselves in the condition of the artist, homo viator by nature.